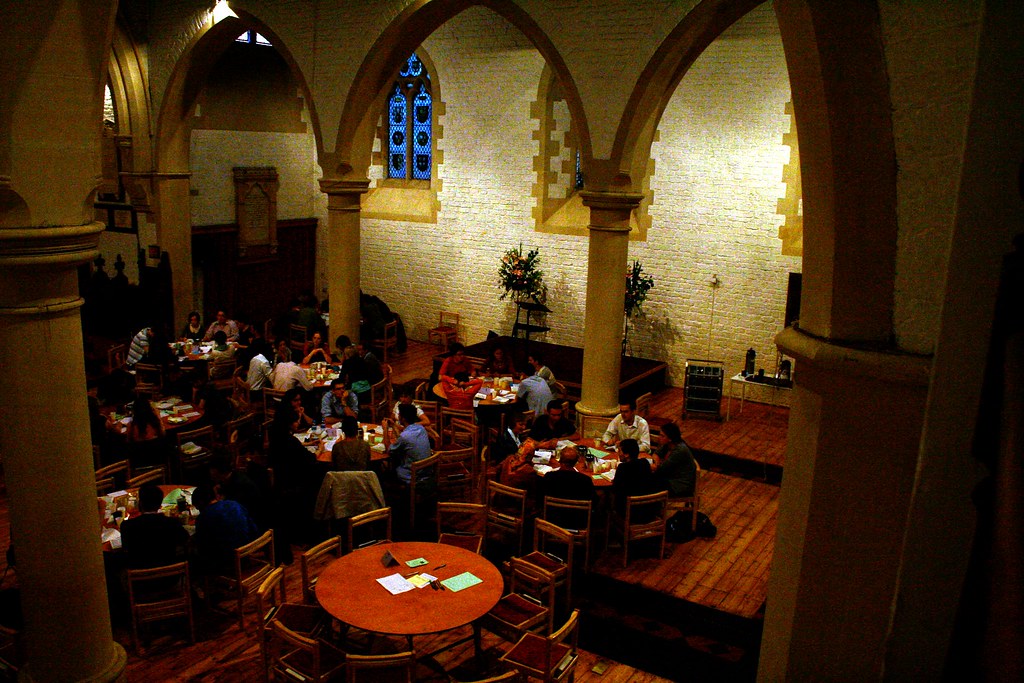 “Roots at St Ebbes Church, Oxford” by readephotography is licensed under CC BY-ND 2.0

We live in a church that is attempting to discern the kinds of disagreement that are tolerable and those that are not.  Paul allowed Christians to agree to disagree about things such as food sacrificed to idols or which days one considered sacred (1 Cor. 8:1–15; Rom 14:15). Paul did not extend this “agree to disagree” attitude to all areas of the church’s life. The pursuit of Spirit empowered holiness was not up for debate (Gal 5:16–25).

The ACNA has agreed in its constitutions and canons to allow each diocese to decide its own policy on women’s ordination. Thus, we do not believe that it is impossible for us to live together, and our bishops have modeled this charity by continuing in fellowship with one another. While the majority of ACNA dioceses do not ordain women, a slight majority of the membership of the ACNA resides in dioceses where ordained women can minister. These statistics do not speak to the beliefs of individual churches, but we are episcopally led. Given this reality, we cannot continue to carry on this discussion as if those who support women’s ordination are a beleaguered minority with second class status. We are not.

I am at peace with living in a church that is discerning the mind of Christ. I am persuaded by arguments in favor of the ordination of women, but I understand that some of my brothers and sisters are not. Since I believe that truth can be known, a consensus in the God’s own time is possible. This means that I must, as a matter of course, be willing to listen to arguments pro and con that help me read the Scriptures and understand the church’s tradition better. I am fine with that process, but what is wearying is caricature. It is in the spirit of discerning the Scriptures together that I offer a reflection on the article written by a fellow Anglican clergy person and theologian entitled “God is not Fair.”

The title does not appear to assume the best of proponents of women’s ordination. It seems to argue that we believe that God’s fairness requires women’s ordination. After setting this up as the basis for his argument, he then goes on to counter this notion.

Now it is undoubtedly true that one might be able to locate some who advocate for women’s ordination based purely on a modern notion of fairness, but to think that this is the primary argument for proponents of women’s ordination in the ACNA is to fail to take seriously our engagement with the relevant Old and New Testament texts.[1] When many of our clergy women (and others) see arguments such as this put forward it is deeply discouraging.

As a point of fact, Ephesians 5:22 does not include the word submit in the Greek text. Rev. Dr. McDermott rightly assumes that Paul intends to refer to submission because he has mentioned submission in 5:21. Nonetheless Eph 5:22 says, and wives to your husbands…” Now it is more than fair to bring the submission language from 5:21 to 5:22, but that also means that section Eph 5:21–33 must be read as a commentary on what mutual submission looks like in a Christian marriage. Therefore, we cannot wall off 5:21 as a discussion of the congregation and not an instruction that husbands and wives submit to one another.  This does not in itself prove anything about women’s ordination or the proper ordering of Christian marriage. It does show that we can sometimes read our assumptions into a text instead arguing from them even when citing them.

The same is true of some passages that follow. McDermott cites 1 Cor 11:10 to speak about the ‘sign of authority’ but he does not note that the context of this passage refers to what women are to wear “while praying and prophesying (1 Cor. 11:5).” Now there is a long discussion about the nature of early Christian prophecy and its relationship to modern preaching/exhortation, but to claim that there is no authority exercised in public speaking in a church is at odds with his later use of 1 Tim 2:12. In his reading of 1 Tim 2:12 Dr. McDermott maintains that it prevents women from speaking and therefore leading men in church. Paul calls prophesying one of the greater gifts that is useful for building up the church (1 Cor 14:1–6). That seems like some form of leading to me. I propose that a viable use of 1 Cor 11 has to at the least

This is again why the citation of 1 Tim 2:12 is problematic. Opponents of women’s ordination in the ACNA too often ignore the extensive scholarship on the meaning of the contested term “αὐθεντεῖν” that is only used here in the New Testament.[2] What is the difference between that word and the more common ἐξουσία? What kind of ‘authority’ does Paul have in mind? The repeated citation of this text without an exploration of the issues involved does a disservice to those listening in who are attempting to live under Scripture. The use of this text involves asking at bare minimum

Let me be clear on what I am not saying. I am not saying that the Bible is a mass of contradictions and we can’t figure any of this out. I am saying that making sense of all these texts is not simply a matter of listing them. It is about engaging the various interpretations, weighing the merits of each, and trying our best to articulate our understanding of ministry in the light of those texts. It is the job of theologians, bishops, and pastors to model that kind of engagement with Scriptures.

As an attempt to demonstrate what I mean let me outline an interpretation of one the contested texts as an invitation to Bible reading together.

1 Cor 14:34–35 says that women should remain silent, and if they have questions then they should ask their husband at home. But in 1 Cor 11, Paul engages in an extensive argument about whether head coverings are proper for women when they pray or prophesy. Unless Paul has forgotten what he wrote in 1 Cor 11, he must have a particular scenario in mind in 1 Cor 14:34–35. 1 Corinthians 11–14 demands a contextual application.  There are a variety of lines of interpretation. One that I find compelling is the following. 1 Cor 14 deals with order in the church. First, Paul addresses multiple people prophesying at once. Then he turns to the issue of some women causing disruption. It is possible that there were women who were interrupting the prophetic utterances or questioning them in a way that was not appropriate. Paul’s correction was similar to his requirement that one prophesy at a time. His concern was order.  As to why Paul would single out women in this context, this could have arisen due to the limited educational opportunities available to women in the first century. Thus, they might not be aware of the proper mode of interaction because they were not accustomed to the give and take of instructional environments. Paul’s counsel would be for women who have questions to reserve those questions for their husbands at home.[3] This call to reserve questions for home may have arisen from the fact that wives might have been participating in the evaluations of their own husband’s prophesies and thereby bringing division into the household. Paul’s counsel would be that such public theological disagreement is unhelpful.

This interpretation takes into consideration the age and education gap that often existed between married couples in the 1st century.  In our context, in which men and women have equal access to education, and they know the proper rules of discourse, it is no longer necessary to tell them to remain silent during the giving or analysis of prophecies (a practice that is not common anymore in most churches). Taking a contextual reading of 1 Cor 11–14 does not mean that I am comprising the authority of Scripture or following the whims of culture. It is an attempt at a contextually thick account of what Paul has in mind.

Taking the Bible as authoritative does not consist in lobbing texts at one another, but explaining how the texts and the actual accounts of women in ministry can come together to help us understand God’s will for his church.[4] We may not in the end agree, but the least that we can do is come to grips with the nature of our disagreement in charity. Who knows God might meet us along the way.

[1] A good picture of the back and forth possible is Two Views on Women in Ministry (revised edition) edited by Stanley N. Gundry. For a detailed look at the relevant Pauline Texts see Paul and Gender by Cynthia Westfall. See also the ACNA’s own reflections here.

[3] Whatever we say about Paul’s reference to the Law has to be in accord with1 Cor 11:5. Paul does not believe that the law demands silence from women full stop.

[4] Dr. McDermott comes closer to what I have in mind here, but this article engages a summary of a summary, not the actual scholarship or the detailed work that undergirds it.  https://virtueonline.org/response-holy-orders-task-force-report-six-anglican-leaders-reflect-acna-statement

Esau McCaulley is Assistant Professor of New Testament at Wheaton College in Wheaton, IL. His research and writing focuses on Pauline theology and the intersection of race, Christian identity, and the pursuit of social justice. He is also a priest in the Anglican Church in North America where he serves as Provincial Director for Leadership Development, which involves oversight of the recruitment and formation of clergy and lay leaders. He is one of the creators of Call and Response ministries, an organization committed to hosting conferences and creating resources for Black and Multi-Ethnic churches. View more posts